Assessments of the influence of the Cambridge Platonists have tended to focus on later writers who explicitly adopted some of their ideas, or have suggested more vaguely that their ideas resulted in liberal theology sometimes verging towards heterodoxy.  This thesis attempts to explore the ‘educational influence’ of Henry More and Ralph Cudworth on a group of Cambridge students who have been selected on clear and consistent principles.  It presents a prosopographical study of undergraduates at Christ’s College, Cambridge, between 1641, when Henry More became a fellow, and 1688, when the Master Ralph Cudworth died.  Thirty-one students − whose tutors’ names are known, who were at Christ’s throughout their undergraduate careers, who graduated BA, who published works showing original thinking, and who could be identified with certainty – have been arranged into three tutorial ‘families’:  Cudworth and More’s circle, the intruded Puritan fellows’ group and Ralph Widdrington’s party.  Beyond the study of tutorial relationships, this thesis also explores the friendship and patronage networks of tutors and students in their careers.  The personalities, careers and writings of tutors and students have been studied with three objectives.  First, an attempt has been made to assess the influence of tutors on students, especially as evidenced in their writings, although a lack of published or manuscript writings by some tutors presents acknowledged difficulties.  Second, the possibility of discovering the corporate, if complex, intellectual ‘personality’ of each group has been explored.  Third, the specific influence of Cudworth and More on individual students has been assessed; while this was greatest in their own tutorial circle, there is also evidence of intellectual influence and practical assistance in the other tutorial ‘families’.  The thesis represents an unprecedented attempt to examine Oxbridge tutorial influence, using a new methodology which could potentially be applied to the students of other major thinkers.

Full text is available through the British Library via EThOS.

A philosophical theologian from Maine. View all posts by Derek A. Michaud 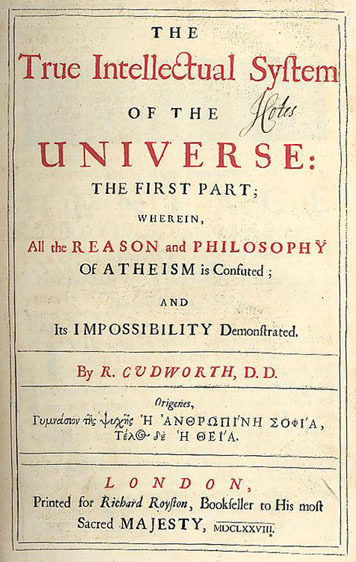